Olivia’s Bridge Street Inn was built in 1817 by William Marris, one of the original founders of New Hope.  Olivia’s is nestled alongside the historic New Hope canal in Bucks County, Pennsylvania. Less than a block from the intersection of Main and Bridge Streets, we invite you to park your car and your cares for the duration of your stay.

In 1817, William Maris—one of the original founders of New Hope, Pennsylvania—built a residence alongside its historic canal. The building remained a private residence until 2006 when James and Celeste Manitta purchased it with plans to build a bed and breakfast in the quaint town. Four years later they built an addition onto the original structure that perfectly blended old and new—keeping much of its original charm and doubling its size. In April of 2011 the couple opened their 8-room bed and breakfast and named it after their young daughter, Olivia.

The rooms of the Inn were named after many of the resident’s owners and inhabitants over nearly two centuries. Today, guests from near and far have parked their cars and their cares for the duration of their stays at Olivia’s Bridge Street Inn.

New Hope, Pennsylvania lies on rolling hills that climb from the west bank of the Delaware River about thirty-five miles north of Philadelphia.

Originally the land of the Lenni-Lenape Native Americans, it became a part of Penn’s Woods in the seventeenth century. A thousand acres of land covering present day New Hope were given to William Penn by King Charles II of England as payment of a debt owed to Penn’s father.  Robert Heath obtained the land from Penn’s brother-in-law and settled here around 1700. He established the first of many mills to come.

John Wells purchased part of the land from Heath’s family and established a ferry service here in 1722 to accommodate travelers on the Old York Road which stretched from Philadelphia to New York City. New Hope was the half way point of the journey.

A few years later the Logan Inn, originally the Ferry Tavern was built, serving as a way station for weary travelers after a hard day’s ride in either coach or saddle.

The town’s first name was Well’s Ferry after John Wells, the first Ferry operator. Then a generation later it became Canby’s Ferry, named for Benjamin Canby who purchased the Ferry from Wells. Some years later the town became known as Coryell’s Ferry. It was named after the operator of the Ferry, John Coryell.

It was not far from here that, on the blustery night of December 25, 1776, George Washington and his men were piloted across the Delaware River by the men of Marblehead, surprising the Hessians at Trenton, New Jersey. Then in June, 1778 Washington led nearly 10,000 troops through Coryell’s Ferry on his way from Valley Forge to the Battle of Monmouth.

Benjamin Parry, who is considered by many to be the “father of New Hope” because he was a driving force that brought New Hope to the pinnacle of its economic success in the late 1700’s and early 1800’s, purchased the mill that was located on what is now the south side of the Bucks County Playhouse. He expanded the flour mill operations to include a flax mill and saw mill.

Then, with his partners, including Samuel Ingham, a three-term congressman and eventually the treasurer of the United States under Andrew Jackson, Benjamin Parry led the group that built the first bridge to New Jersey from New Hope, established the first New Hope bank and helped to finance the construction of the Delaware Canal through town.

The Delaware Canal opened in 1832 providing an economic outlet for Bucks County. It brought growth and prosperity to the area. By the time of the American Civil War nearly 3,000 boats traveled on the canal each year. Although the railroads hastened the demise of the canal operations, it was still used commercially until 1931. Up until recently, visitors could enjoy a leisurely ride down the canal powered as in the old days by a brace of mules which walk the old tree-covered tow path that runs parallel to the canal.

​After receiving its name from three ferry operators in three successive generations, New Hope was finally incorporated in 1837. The name “New Hope” came about in an unfortunate way. Parry’s mills burned to the ground in 1790 creating severe economic hardship for the area. Undaunted he rebuilt the mills in about one year, naming them “New Hope Mills”. Following the disaster and the renaming of the mills, the town became known as New Hope.

In 1891 the New Hope-Ivyland Railroad began providing a speedier mode of transportation. It now provides a delightful fourteen mile, scenic round trip to Ivyland for residents and visitors alike.

There are thirteen picturesque covered bridges in Bucks County; some of them are just a few miles from New Hope. More than one hundred buildings in New Hope are over one hundred years old and many of the original buildings from the mid-1700’s have been preserved.

Benjamin Parry’s eighteenth century Georgian style mansion in the center of town on South Main Street is still the jewel of New Hope. Owned and maintained by the New Hope Historical Society since 1966 it is open to the public for tours and it is the focal point of many community activities.

At Olivia’s you will discover something new during every visit. 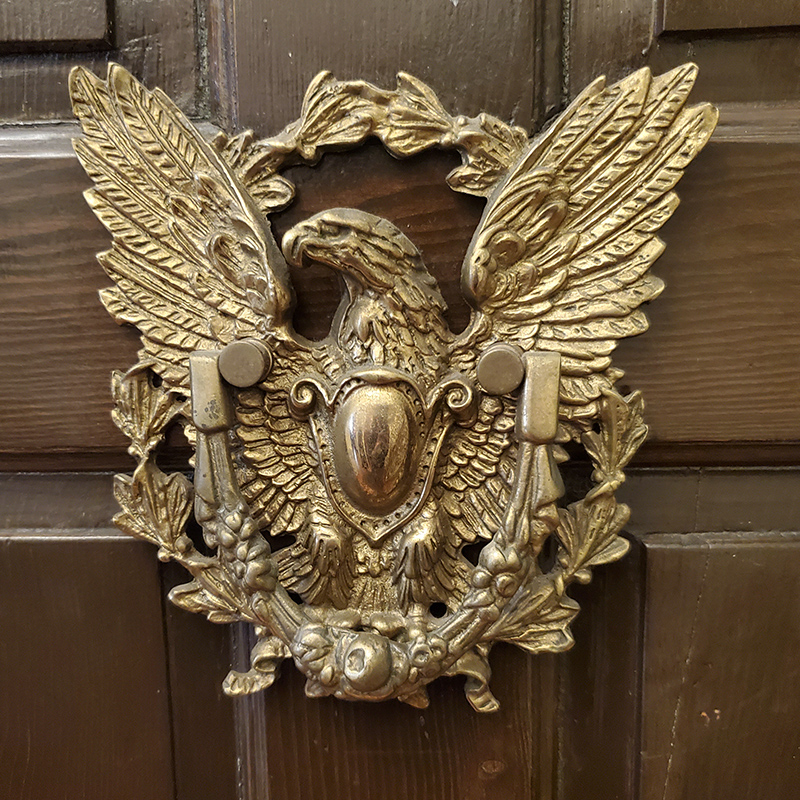 Shown here, a beautifully carved eagle on an inner door knocker at Olivia’s Bridge Street Inn. It’s no surprise to find this here as the the Continental Congress had newly approved (1782) the official seal for the country featuring the eagle to accompany its newly minted flag. The eagle represented the ancient symbol of Jupiter, king of the gods, and, therefore, a symbol of ultimate authority. 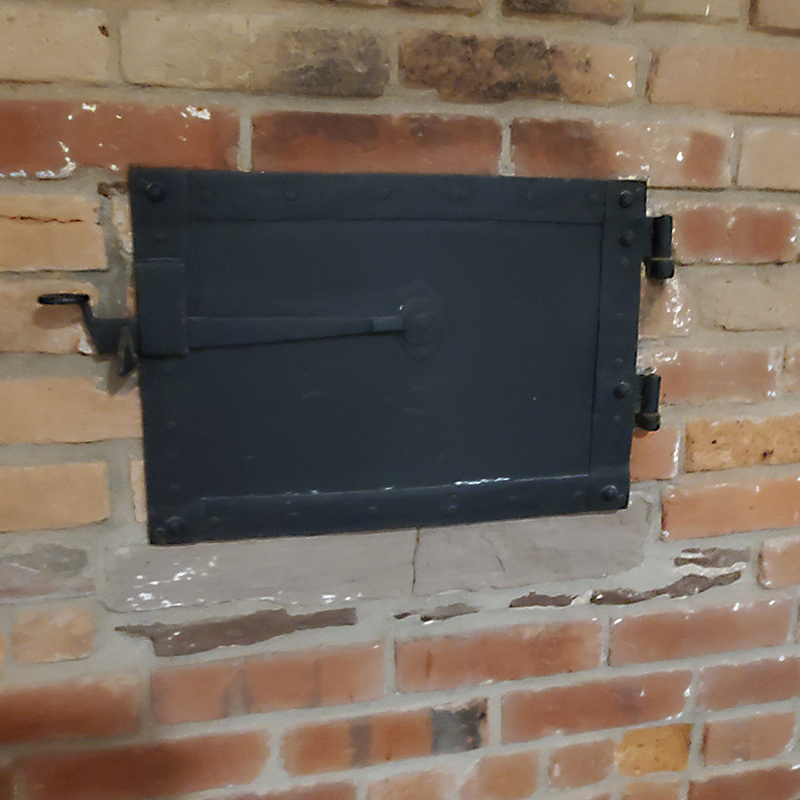 Guests who stay in the Tiernan room are always surprised to find this early 19th century bread box. What looks like it was made to keep your valuables safe, was actually made to keep bread fresh longer! 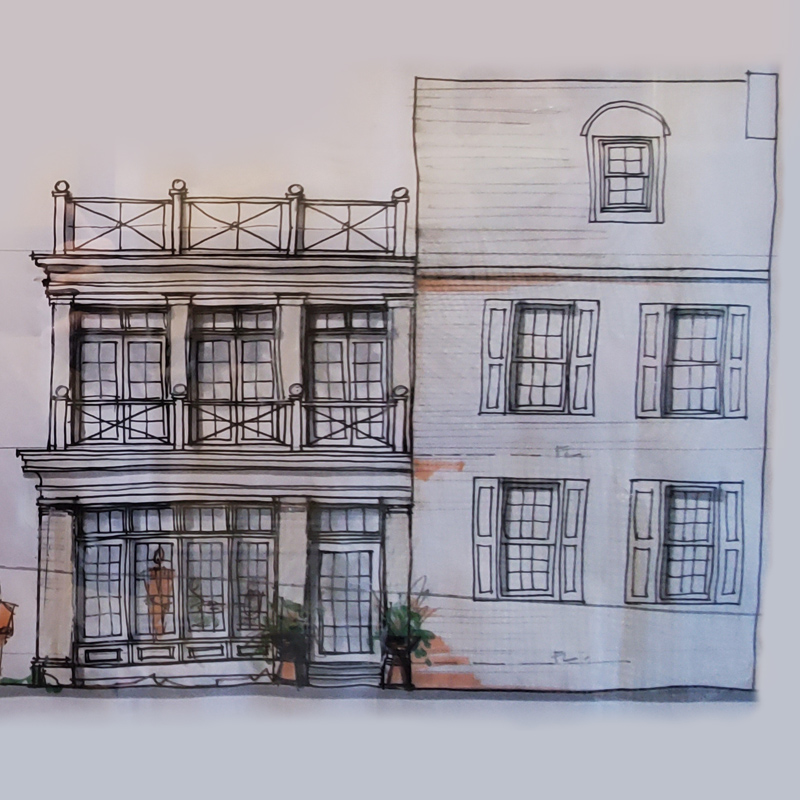 In 2008 Curtis Fey A.I.A Architects drew up what is now the remodeled Olivia’s Bridge Street Inn. 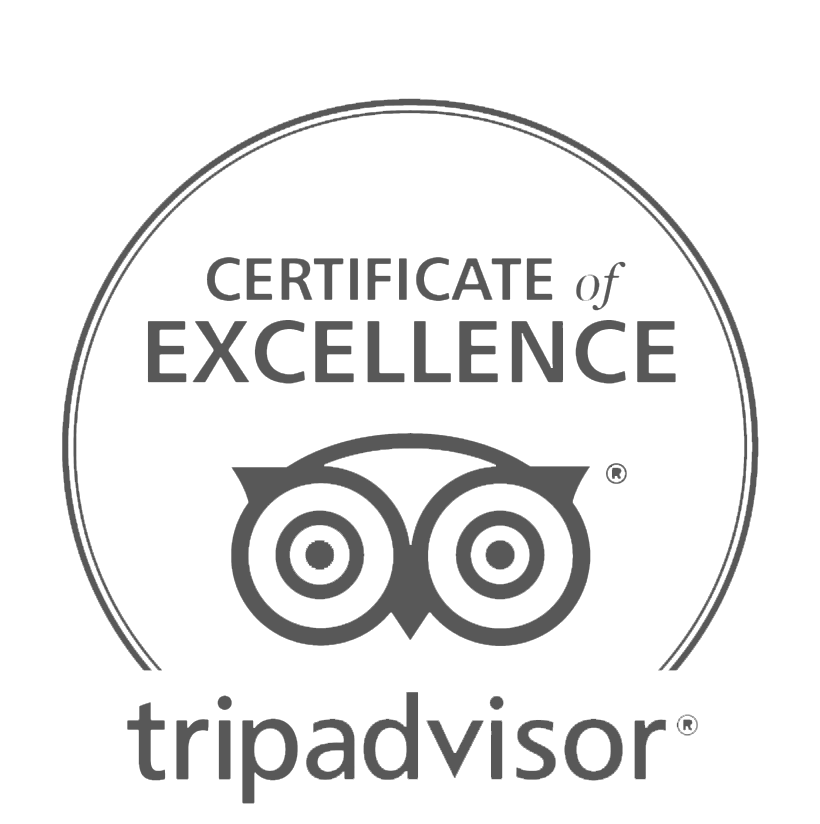 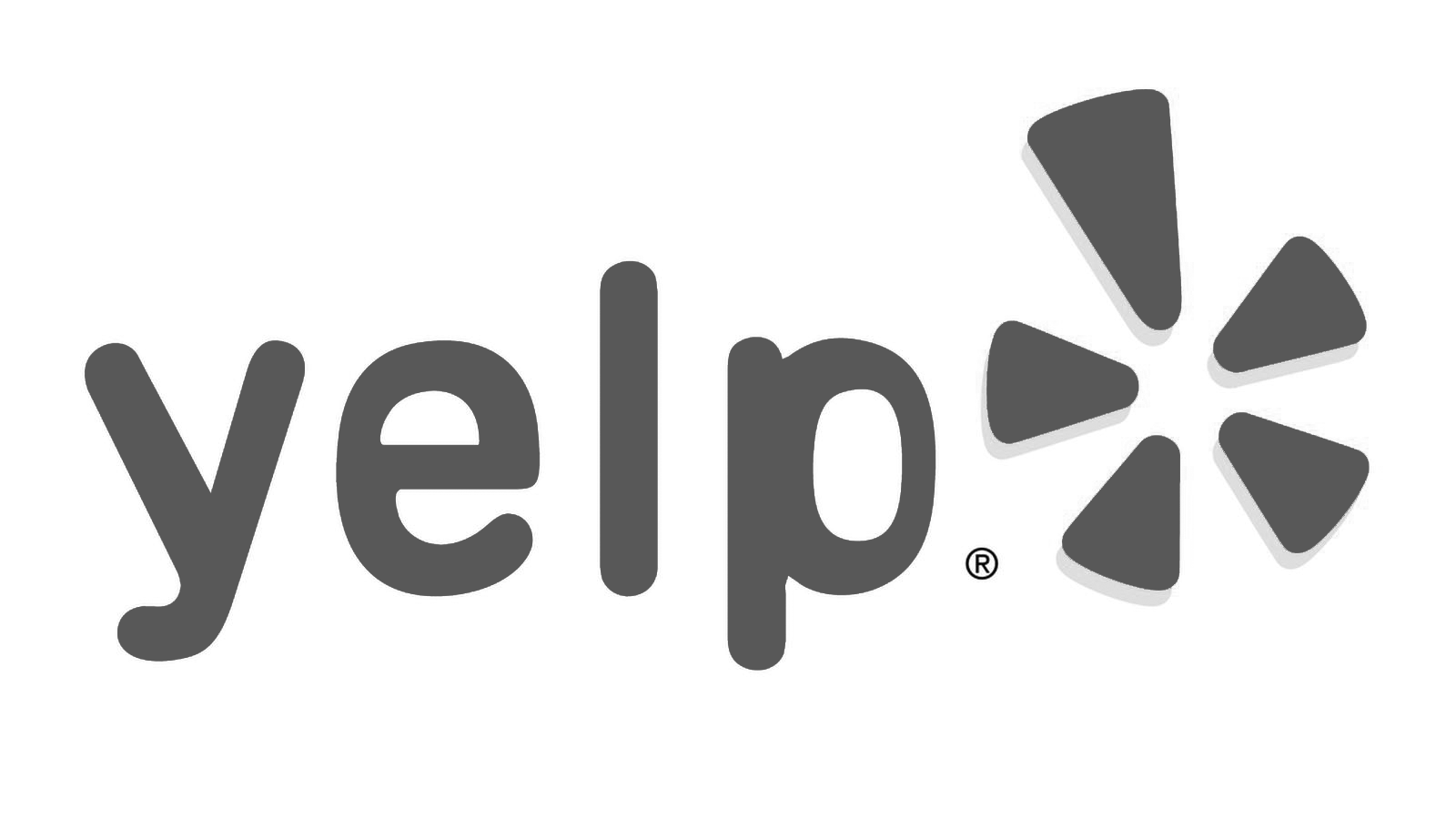